Get ready for some MASSIVE news – that’s right, The 1975 are coming to The Joint at Hard Rock Hotel on Tuesday 16th April 2019 with their all-new album, “A Brief Inquiry Into Online Relationships”. It’s going to be EPIC – grab your tickets now while they last and get ready for the night of your life! 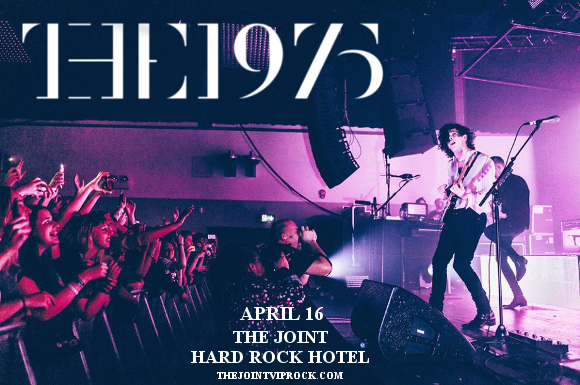 Formed by schoolfriends Matthew "Matty" Healy, Adam Hann, Ross MacDonald, and George Daniel in the early 2000s, The 1975 took their name from a Jack Kerouac beat poetry book and released four EPs, leading to their signing a major record deal and the release of their self-titled debut album in 2013. The album was a massive success, hitting the top of the UK albums chart. Clash magazine wrote; ”It's a great pop record with plenty of depth (a rare thing) that will prove divisive. Some will dismiss this band in one listen (or none) as the next Owl City, but with years of playing together already, plenty of fans, and lots of songs ready to go, The 1975 will be one overnight success that'll outlive the critics.”

Now onto their third full-length release, The 1975 have more than proven that prophecy to be true. Get ready to see one of the biggest bands in the world right now – get your tickets to see the 1975 NOW while you still have the chance!