One of the most prominent female rappers of all time, Lauryn Hill, celebrates the 20th anniversary of her classic album The Miseducation Of Lauryn Hill this year, bringing her anniversary tour to The Joint at Hard Rock Hotel on Friday 7th September 2018! The soul singer hopes the message of her iconic album still rings true today:

"This album chronicled an intimate piece of my young existence," Hill says. "It was the summation of most, if not all, of my most hopeful and positive emotions experienced to that date. I loved and believed deeply in my community's ability to both love and heal itself provided it received the right amount of support and encouragement."

"Our world today, both complex and changing, is in need of the balance between moral fortitude and cathartic expression. I hope the love and energy that permeated this work can continue to inspire change with love and optimism at the helm." 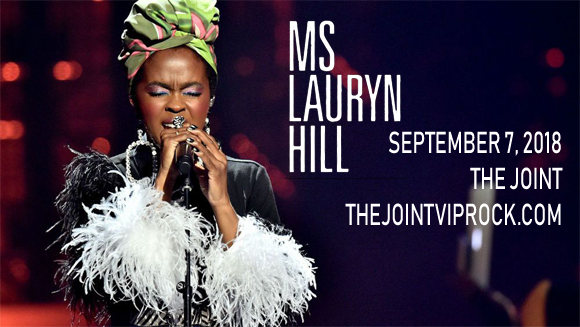 Widely regarded as one of the best female rappers of the 1990s and an originator of the neo-soul genre, Lauryn Hill is an American singer, songwriter, rapper, record producer. Hill first came to prominence as Whoopi Goldberg's co-star in the 1993 film Sister Act 2: Back In The Habit. That same year, Hill signed with Columbia/Ruffhouse Records as part of the hip group The Fugees. The Score (1996), The Fugees' second studio album, was a huge success both critically and commercially, selling over 17 million copies worldwide and winning a Grammy Award for Best Rap Album,. The album also launched their breakout hit, a rendition of “Killing Me Softly”, which won the Grammy Award for Best R&B Performance by a Duo or Group with Vocals. Two years later, Hill released her first and only solo studio album, The Miseducation Of Lauryn Hill, which featured the singles "Doo Wop (That Thing)", "Ex-Factor" and "Everything Is Everything". The album debuted at number one on the Billboard 200 and earned her a record-breaking ten nominations and five awards at the 41st Grammy Awards, including Album of the Year, Best R&B Album, Best R&B Song, Best Female R&B Vocal Performance, and Best New Artist.