The Joint at Hard Rock Hotel is proud to present the very best in popular music! We now present you with the chance to see the sensational Bon Iver, with support from the amazing Velvet Negroni on Thursday 13th April 2017 – tickets on sale now, but hurry, they won’t hang around for long!! 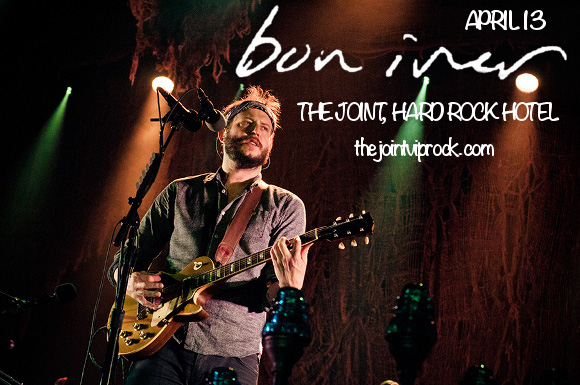 Founded in 2007 by singer and principal songwriter Justin Vernon, Bon Iver’s debut album, “For Emma, Forever Ago “ was self-released by the band in July 2007. Suffering from various physical conditions and growing frustrated at his songwriting, Vernon left for his father's remote hunting cabin,leaving behind his old songwriting methods and focusing instead on melodies which he later created lyrics for, with the intention of creating a more subconscious meaning. The songs he wrote are heavily folk-influenced, including chordal compositions and his signature falsetto. After a few performances and some online exposure, he was signed to a record label in the same year as the release of the album.

“For Emma, Forever Ago” was released to an overwhelmingly enthusiasic reception from audiences and critics alike, featuring on many “best of the year,” lists and scooping up multiple awards. The album was certified gold, with sales of over 500,000 copies!! Bon Iver’s best known single, "Skinny Love" also went gold. Justin Vernon quickly put a band together to tour, and Bon Iver have been going strong ever since.

Don’t miss out on your chance to catch the ethereal, atmospheric band live – get your tickets to see Bon Iver while they last!!