Are you ready to see one of the freshest yet most enduring acts of the last two decades??? That’s right, it’s the band who gave you “Metallica By 4 Cellos,” and everything after – cellists of heavy metal APOCALYPTICA are taking over The Joint at the Hard Rock Hotel on Sunday 1st October 2017!! Tickets selling fast for this truly unique live experience – don’t miss out!! Hit the “Buy Tickets,” button now to be sure of your place!! 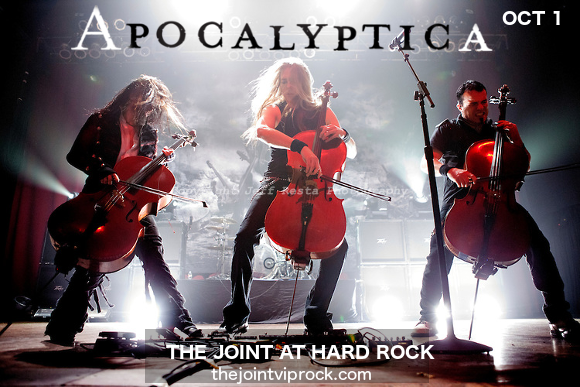 As time went on, however, the band expanded their repertoire, adding more and more original songs into their lineup and finding that, rather than drifting away, their fanbase grew larger and ever more fervent. The original material was every bit as popular, if not more so, than the covers – in particular the bands’ artful collaborations with several massive guest vocalists on each album, including Sandra Nasic of Guano Apes and Ville Valo of HIM to name a few!!

Live, the band deliver a show unlike anything you have ever seen. It shouldn’t be possible to run around playing a cello and headbang at the same time, but Apocalyptica do it, and their performance is flawless. Prepare for a show that is truly unique – get your tickets to catch the Finnish neo-classical legends while they last!!